Chronicles of a Stuntman

Life through the eyes of a crash test dummy

As all of the Miami work has gone, I woke up at 4:00 AM and was out the door by 4:30 AM. It was time to go back down to Miami to shoot a scene for my second Telenovela: Tierra de Reyes or Land of Kings! The scene of the day was a shootout in a church.

Stuntmen always talk about the “hurry up and wait” of filming. And… I think I got a pretty good taste of that this time. We arrived at 9:00 AM and quickly were sent to wardrobe to get our wedding attire. After about 15 minutes, I walked out in a nice black suit ready to attend a fake wedding! Side story…lesson learned here: When asked to bring black shoes, make sure you ask what kind of black shoes. Stupid me…I brought regular old black tennis shoes and no back-ups. After putting on the suit and black tennis shoes, the wardrobe lady looked at me like I was crazy and said “What are you wearing?!” After a pretty embarrassing exchange, she gave me black DRESS shoes. Did anyone else make this mistake? Absolutely not…just me. 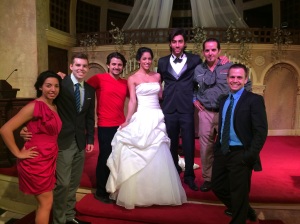 Right after wardrobe, we were moved into the church to talk about the scene. It was going to be a shootout where all the stunt people were strategically placed among the extras. When the shots started to “rain” down on us, there would be planters blowing up, things being thrown in the air, fake blood everywhere, and each of us picked off one by one. It was going to be awesome!

And then…the wait part. The weather did not agree with the shoot that day. At about 9:45 AM, when we were gearing up to start prepping the effects, the sky opened up and poured. Although we were able to stay dry inside, the current filming outside was all of a sudden halted. Our scene couldn’t be shot until the prior scenes were finished. And it not only had to stop raining, but everything had to dry so that the shots would be consistent. Long story short: we waited, and then went to lunch, and then waited some more…and at about 5:00 PM, we started setting for the shot.

Holy complex! I was blown away by the amount of work the coordinator and his assistant put in that day. First of all, from scratch, they made the squibs…

Courtesy of Wikipedia: A squib is a miniature explosive device used in a wide range of industries, from special effects to military applications. It resembles a tiny stick of dynamite… [It] generally consists of a small tube filled with an explosive substance, with a detonator running through the length of its core…

Then… they wired the entire aisle with squibs to give the effect of things blowing up. Without writing a novel on this, it basically required them to cut into each prop, wire the explosive and then carefully set it back in place. Please forgive me here as 1) I am still ignorant on effects and 2) I could never do justice to the amount of work they did. Anyway, in addition to wiring the aisle, they ran wires to each of the stunt performers all throughout the church, strategically hiding it under rugs and up pants and behind dresses. I don’t even want to know how much the dress cost that they cut up and put the blood squib in.

After about two hours of wiring and rehearsals, all of the fake blood explosives (laymen terms) and mini-explosives were wired and ready to go. Oh and to add to everything, you only get one shot at this. If one of us badly messes it up, they have to start from scratch. So…after 10 hours of waiting, we were ready to go.

My cue was the 4th “bang.” Once I heard this, I was to get up frantically, get shot in the back, and then slump over the pew in front of me. Now, I have never done this before, so I had no idea what this explosive was going to feel like on my back. Do I react to the sound? Or, was I going to feel the squib explode and then react to that? I guess I would just have to go with my gut…

Tres…dos…uno…acción! Bang! The first stuntman is shot in the head. Bang! Bang! Planter 1 & 2 blow up 15 feet in the air. Bang! Stuntman number 2 gets shot and falls to the floor. The extras in the pew in front of me evacuate to the side. I stand up like I’m trying to get out and…Bang! I pretend to get shot in the back and lay lifeless over the pew. After a few more super loud shots and flying props, the scene is over. We all stayed in our same position waiting for the stunt coordinator to make sure everyone is OK. As I lay uncomfortably with the edge of the pew in my stomach I thought to myself, “I didn’t feel a thing. Good thing that I went off the noise of the squib instead of the feeling on my back.” Once we got the thumbs up that everyone was A-OK, we were cleared to get up.

After I removed the wires from my body, I took off the sport jacket and…no blood mark and no hole in the jacket. The squib never went off!

Come to find out… when the extras in the row in front of me evacuated after the 4th shot, one of them pulled my wire out of the main control. With no control, there was no spark to ignite the squib.

When you go back to the video, you see that the shot that I reacted to was actually the next explosive going off on a planter behind me. I am glad that I made the decision I did. If I decided to act like a “deer in headlights” I would have made a whole room of people very, very mad.

But oh well, it’s not about me. At least they still got the shot!

4 thoughts on “10 hour wait and explosives taped to my back!”